The Huron-Wendat Fresco is located at Place de la Nation, on a wall near the Saint-Charles River, at the intersection of Bastien Boulevard. The fresco presents animal skins, putting the history of the Huron-Wendat nation in context. They symbolize the union and survival in the respective universes of women and men, through their family, social, commercial activities and relationships, The Fresco of the Wendat People was inaugurated on October 10, 2008, in the presence of Mr. Jean Besson, Deputy Vice President for International Relations of the Rhône-Alpes Region. This work is directed by Murale Création and two Huronnes-Wendat, Manon Sioui and Francine Picard.

A tour with a guide is available with the Huron-Wendat Museum’s Esk8entesa Discovery Tour.

Only available in high season with the interpreted discovery tour 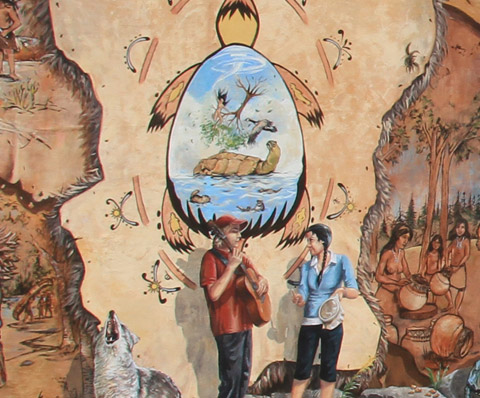