A unique singing moment with Fernande and Christiane Gros-Louis will be offered in the Wendat language at the end of the workshop on the oldest Canadian Christmas song: Jesous ahatonhia in the 17th century. This is the first activity of our holiday schedule that will take place from December 21, 2019 to January 4, 2020 during our opening hours from 10am to noon and from 1pm to 4pm. 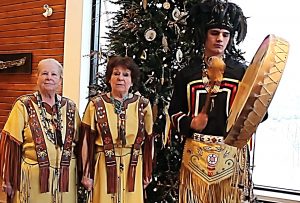 Conference on November 6th 2019 at 7:00 pm
“Reclaiming its history” with Louis Lesage, Director of the Niowentsïo Office as part of the exhibit « Ahchiouta’a recounts the history of the Huron-Wendat of the St. Lawrence ».

Summary of the presentation:
Summary of the presentation: The Huron-Wendat Nation has the largest number of archaeological sites in the country for a single First Nation. This unique heritage has been subject to archaeological excavations for more than 100 years and for reasons such as remoteness, in particular, the Huron-Wendat Nation has remained absent from these excavations. It was not until the 1970s that the first excavations carried out by young Huron-Wendat took place in the South Wendake. Then, the first re-burials were carried out in the 1990s. This feeling of protection and appropriation of our culture, always present in the community, has been progressively amplifying until today, where a team of about 10 excavation technicians participates in various archaeological work sites in the South Wendake. In parallel, the interpretation of the history and the life of our ancestors were first documented by religious writers and then academicians, such as  archaeologists, sociologists, anthropologists and others, without the Huron-Wendat being really involved. However, in the last decade, a bridge with academics was developed and saw to the birth of collaborative research projects where questions leading to research would be asked by the Huron-Wendat themselves, thus acting on the course of present and future research in archeology. The long road to reappropriation of history requires sustained efforts so that the institutions gradually dissipate their hold to give way to the First Nations to write their story.

Biography of the speaker
Mr. Louis Lesage is a member of the Huron-Wendat Nation and lives in Wendake. He holds a master’s degree and a PhD in biology from Laval University. He worked for the Canadian Wildlife Service (CWS) as a biologist – Aboriginal Liaison from 2005 to 2011. At the CWS, he also contributed to the recovery of species at risk of extinction. Louis Lesage also chaired the Joint Committee on Hunting, Fishing and Trapping (CCPP) of the James Bay and Northern Quebec Agreement from 2006 to 2011. He is now Director of the Nionwentsïo Board of Directors’ Office. Huron-Wendat Nation. Its role consists in having the Huron-Wendat’s rights to practice their traditional activities and that the Council of the Huron-Wendat Nation participates in the ongoing development of its traditional territory, the Nionwentsïo. It also ensures that the Huron-Wendat heritage is protected and enhanced, including the archaeological wealth of the Wendake South, Ontario.

Conference, performance and demonstration
” T-T-T-T – From the trembling tent to the talking tent in contemporary Aboriginal art ” with the sociologist and curator Guy Sioui Durand accompanied by the artist Manon Sioui,  at Musée huron-wendat.

Taking advantage of his eloquence inciting to participation, what he calls « performed harangues », the Huron-Wendat sociologist and curator Guy Sioui-Durand will bring out the authentic specificity of the current manifestations in contemporary Aboriginal art. With the in situ complicity of Manon Sioui, from Wendake, and linked to the animated installations of the Huron-Wendat Museum’s guest artist, Hannah Claus, he will highlight the significant Iroquoian contribution, Huron-Wendat and Kanienke’a:ka, to the Manif d’Art – The Québec Biennial.

The Aboriginal World is dynamic and its artists are its “portageurs” or transmitters. The artistic creativity is an accomplice to the territorial affirmation, the respect of Mother-Earth and women as well as the Aboriginal languages’ revitalization. It manifests itself as much on the scenes and on the screens than in international art locations and in our communities.

February 23th, 2019 in pm
The museum will welcome the Manif d’Art 9 participants
An event in rotation with different places, by reservation on their Web Site