You can buy your tickets online at our box office now!

Description of the project

Onhwa’ Lumina is a luminous, immersive, multimedia journey in nature inspired by Wendat myths and cultural symbols that will transport visitors to a magical universe that combines nature and technology, with the rich history of the Huron-Wendat Nation as a backdrop.

This new, world-class tourist attraction developed on the territory of the Huron-Wendat Nation, in the heart of the Saint-Rémy wooded area, will begin operations in June 2022.

1.2 km long and lasting 50 minutes, the site will welcome visitors at nightfall nine months out of the year, from June to October and December to March. The opening hours will vary according to the time the sun sets, and the last visitors will be admitted at 10 pm at the latest in order to comply with municipal by-laws stipulating that entertainment must cease at 11 pm at the latest.

During the day, the site will be accessible to the general public, which will be able to explore the Saint-Rémy wooded area.

Several ministries at both the provincial and federal levels were called upon to contribute to this magnificent project, which is not only economically promising for Wendake, but also structuring for the Quebec City region and Quebec as a whole in order to revive, stimulate, and diversify the country’s tourism offerings.

The project represents an investment of over 6 million dollars and is backed by several partners who have identified the tourism potential, cultural value, and unifying nature of Onhwa’ Lumina.

As confirmed in an impact study conducted by RCGT, the project will subsequently be self-financing thanks to the ticket revenue that it will generate.

Genesis of the project

The Wendake Tourism Office acts as a project manager and joins forces with the world-renowned Quebec-based firm Moment Factory, which has produced numerous multimedia experiences in natural settings in Europe, Asia, and elsewhere in Canada. In Quebec, the company has completed similar projects in Mont-Tremblant, Coaticook, St-Félicien, and Chandler.

In the case of Onhwa’ Lumina, the discussions focused on the desire of the Wendake Tourism Office to continue welcoming national and international visitors and tourists to an outdoor site where the culture and history of the Huron-Wendat Nation could be shared in a playful, immersive way that highlights the panorama of Wendake.

The team from Moment Factory worked together with members of the Huron-Wendat community involved in culture, the revalorization of the Huron-Wendat language, and the Wendake tourism sector. Artists from the Nation also participated in a very concrete way in the development of the project and its concept.

With their many Lumina projects, Moment Factory is recognized for showcasing the various sites that it illuminates and brings to life. With this project, Moment Factory will highlight the unique culture of the Huron-Wendat, the rich history of the Nation, as well as its present and future.

The course will be set up in the Saint-Rémy wooded area, located behind the Wendake Sports Complex. Existing infrastructure can be used, such as Rue Grand Chef Thonnakona, a portion of the parking lot, etc. For the 10 years that the project will last, mobile buildings will be set up to accommodate the washrooms, box office, and gift shop.

The site will operate on about 200 evenings per year. The months of April and November will be used to ensure the maintenance of the equipment.

An agreement with the Huron-Wendat Nation Council has been concluded to make the land, which was intended to accommodate a new housing development, available to the Wendake Tourism Office for a ten-year period for the purpose of presenting Onhwa’ Lumina.

The project plans to take advantage of the infrastructure already developed during the construction of the Wendake Sports Complex (roads, lighting, electricity, on-site food offerings, large parking lot, etc.). Thanks to its strategic location and the surrounding infrastructure, the place was ideal for setting up the Onhwa’ Lumina course.

This is the best site to bring this big, beautiful project to life. We will do so with respect for the environment and the people who live in the area.

Showcasing the territory and respecting the environment

In harmony with the ancestral values of the Huron-Wendat Nation of respect and the protection and preservation of nature, we are committed to minimizing our impact on the site in order to protect the natural aspect of the St-Rémy wooded area as much as possible.

The course will allow the wooded area and this exceptional site to be highlighted. The protection of the environment and the removal of the plants were subject to great concern and constant priority.

The sound impacts will be minimal. Indeed, the sound effects are isolated and do not interfere from one area to another.

At all times, the sound and light impact complies with City of Québec by-laws.

The implementation of a shuttle service on busy evenings is currently being examined. The site already has many parking spaces (those that already exist, plus the addition of +/- 200 new spaces).

From the first days of the opening of Onhwa’ Lumina, we will take steps to ensure the flow of traffic in the area.

Your opinion matters to us!

The benefits of this project can already be felt: a feeling of pride within the community, tangible economic benefits, increased attractiveness to tourists, and the celebration of Indigenous culture.

Beyond this pride that lives within us, we are concerned with developing a project that will generate the greatest possible support. We are always open to constructive suggestions. If you have any questions or comments about this project, we invite you to contact us by email at accueil[email protected]

Q: How is this project financed?
A: Several ministries (in Quebec and Canada) were excited by the project and agreed to participate in the financing package.
On the operations level, the project will finance itself through the ticket revenue that it will generate.
In addition, Onhwa’ Lumina will allow for the creation or retention of 173 jobs and generate 11.4 million in economic benefits.

Q: What is the lease term for this project?
A: The project is expected to span the next 10 years.
The Huron-Wendat Nation Council and the Wendake Tourism Office have concluded an agreement for the use of the St-Rémy wooded area, adjacent to the Wendake Sports Complex, where the course will be developed with respect for the environment and the residents of the area.

Q: What will happen to the site when the lease expires?
A: It will be up to the Huron-Wendat Nation Council to decide on the future purpose of this site. Our only concern is to make it an exceptional, not-to-be-missed tourist attraction.

Q: Why consult the public knowing that the project will go ahead anyway?
A: We are concerned with developing a project that generates the greatest support. We are always open to constructive suggestions. Your questions and comments are welcome at the following email address: [email protected]

Q: How will this project make reference to Indigenous history?
A: By the mere fact of its name in the language of origin, there is no doubt that Onhwa’ Lumina is a tribute to Huron-Wendat culture.
The word Onhwa’, which means “now” in the Huron-Wendat language, inspired the creators of the course to build a bridge between the past and present using their world-renowned technological mastery.
The goal is to transport visitors to a magical universe that combines nature and technology, with the rich history of the Huron-Wendat Nation as a backdrop. The mythology, legends, language, and sounds that make up Huron-Wendat culture will be placed in the foreground.
The element that transcends the history of the Huron-Wendat is certainly the love of the land, the flora, and the fauna.
Onhwa’ Lumina is a sustainable project steeped in the values of respect, integrity, and continuity of the Huron-Wendat territory and culture.

Q: Will the site be developed in an ecologically responsible way?
A: In harmony with the ancestral values of the Huron-Wendat Nation of respect and the protection and preservation of nature, we wish to minimize our impact on the site in order to protect the natural aspect of the St-Rémy wooded area as much as possible.

Here are our commitments:

From its design to its production, including its operation, Onhwa’ Lumina is a sustainable and structuring project steeped in the values of integrity and continuity of the Huron-Wendat territory and culture. The course will allow the wooded area and this exceptional site to be highlighted.

Q: What energy source will you use to power your light path? Will you use generators?
A: All electrical connections will exclusively be made to the Hydro-Québec network, for both the lighting portion and the sound equipment.
The project does not require any fossil fuel-powered generators.

Q: How will you reduce the impact of the light effects on the neighbourhood?
A: Our project includes mitigation measures to dissipate the effects of the lighting.
To ensure the preservation of the starry sky, all light fixtures, spotlights, and light effects will be directed toward the ground to avoid blinding the neighbourhood as much as possible.
The paths will be illuminated to ensure the safety of the spectators. The intensity of the lighting will be reduced to avoid interfering with the shows between the stations.

Q: Will you allow musical performances to be held in the area/on the site?
A: No. No stage installation is planned. Furthermore, it is agreed that the sound elements included in the light path will be reduced to the lowest possible minimum. The soundtrack only activates when visitors arrive at an interpretation point. The range of the sound will be contained there.

Q: You are expecting about 800 people per hour. Where will they park?
A: A paved parking lot with 200 spaces will be built on the lot next to the Sports Centre. The parking lot will be accessible from Boulevard de la Colline and Rue Grand Chef Thonnakona.

Q: The site is a place where many people like to go for a walk in the forest. Will they be able to keep going there free of charge?
A: Absolutely. During the day, we will open the gates set up at the entrance to the site to allow the public to access the wooded area.

Your opinion matters to us!

The benefits of this project can already be felt: a feeling of pride within the community, tangible economic benefits, increased attractiveness to tourists, and the celebration of Indigenous culture.

Beyond this pride that lives within us, we are concerned with developing a project that will generate the greatest possible support. We are always open to constructive suggestions. If you have any questions or comments about this project, we invite you to contact us by email at [email protected]. 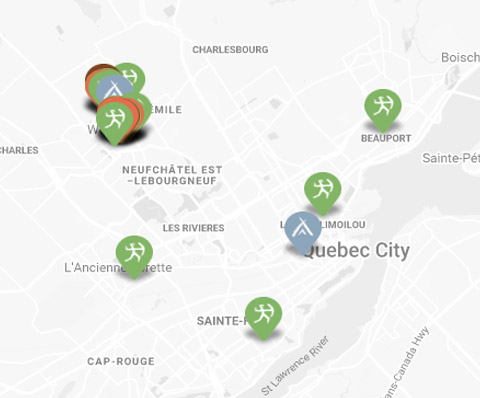